Why leave your country and relocate to Brazil

Mass media, especially those, not controlled by governments or oligarchs, are full with pessimistic scenarios for developed countries. Probably most of us are aware of government debts, property bubbles or budget deficits. We are so aware, that 99%¬Ý of such information is stored somewhere in our brains together with new movie reviews or plastic surgery scandals. But, what if those scenarios are not pessimistic ? ¬ÝWhat if they are real ? What happens tomorrow when (if) value of dollar (less feasible, but still‚Ä¶ euro) ¬Ýequals value of paper ? Good paper, need to say. And then you face a question: is it time to relocate ? I will try to analyse current situation and explain why “relocate Brazil” may be one of the most popular search combinations. I just can not understand, how it works, when you give dollar to ‚Ä¶Chinese‚Ä¶ and receive a product.¬Ý I do understand when you have grain, exchange it for dollar and exchange the latter again for new bubble-phone.¬Ý But when you have nothing except dollars‚Ä¶ Of course it‚Äôs very good (for me too) to have nothing except cash, but I am talking on global basis. Just seating on high mountain and looking on people, wasting land, resources and own life time. ¬ÝAnd I recognized resources from that mountain.¬Ý Some people have natural ones, some people- cash, some people – both. People having cash, buy someone‚Äôs working time, oil, houses‚Ä¶ you name it, to have more cash. Cash moves in economy, increases in volume (not in value, almost as NPV principle states), and‚Ä¶ I do not want to make economic analysis; of course, such analysis looks credible and professional, especially when you use some word combinations like ‚Äúdemand drivers‚Äù, ‚Äúmacro economical research‚Äù, etc. ¬ÝBut in essence, most of ¬Ýdominating world economics just manage electronic signals in banking systems, moving money to provide economical or demographic politics. How long may last situation, when competitive advantage of your country is money ? What happens when food exporters will have to close borders to feed own population ? ¬ÝJust because water supply ended ? Most of us would reply on this passage: “You dramatize situation too much. Apocalypses may happen, but definitely not tomorrow. There were so many such clairvoyants for the human history.‚Äù Scarcity of water¬Ý

A farmer takes water from a mostly dried-up pond to soak his vegetable field on the outskirts of Yingtan, China, on Dec. 10, 2007. Source:Reuters

According to researches of Christian development agency Tearfund and The International Water Management Institute (IMWI), around 700 million people today face water scarcity, and the number of people living in severely water stressed regions is set to rise to: -1.8 billion by 2025; -5 billion by 2050 (almost half of world population) unless serious measures are taken to improve the situation. On the other hand, per-capita consumption of water ¬Ýresources(actually any resources) in developed countries ¬Ýgrows exponentially. Just consider projected time frame (12 years from now, or childhood period for a human) and imagine quarter, and later- half of world population suffering from thirst (water consumption for food accounts 30% of total water consumption). What may happen with the rest of the world ? Will it be possible for agricultural countries to maintail yields and production volumes large enough to feed the rest ? Who knows…

“Who knows”- the favorite answer of ¬Ýfinance management lecturer (manager of large US hedge fund) at my MBA course in CWRU, when we were discussing currency or futures rates. In developing countries output must be doubled until 2050, implying an increase on average of almost 1.4 percent per year, which means an enormous effort for farmers, agricultural researchers, extension workers, irrigation development, fertilizer industry and infrastructure for input transport and market accessibility. Yes, who knows what will happen with our children…

An Afghan man pushes a water containers from a public water pump in Kabul on Jan. 13, 2010. Source:Ahmad Masood / Reuters

‚ÄúCommunities may no longer grow. Cities and towns risk catastrophic fire because there’s not enough water to extinguish blazes. Lawns are relegated as a luxury for the rich‚Äù. ¬ÝGuess what does it mean? No, this is not my effort to pressure audience or an excerpt from apocalyptic movie script. This is analytical 5-years scenario for ColoradoRiver basin, suffering from ¬Ý23 percent increase in water use and loss (stress on the river system), according to U.S. Bureau of Reclamation.¬Ý The bureau conducted supply-demand study that says residents of Utah and the other six basin states should expect droughts lasting five years or more 40 percent of the time over the next 50 years.

Summary: it’s better to be in right region until, that is, water ended. Scarcity of land Yes, water is becoming the real constraint. Some analysts (Earth Policy Institute in Washington) believe there‚Äôs quite a bit of land that could produce food if we had the water to go with it. As such, according to FAO statistics from 1961‚Äì2007 cultivated land area increased by about 13 percent from 1 370 million ha to 1 559 million ha, which represent the better and more productive part of the global land resources. Future increase of this share is impossible without such controversial and highly debated measure as deforestation. The global land mass, excluding Antarctica, comprises 13.3 billion ha, including (see the map below):

– 11% (1.6 billion ha) is currently used to cultivate agricultural crops, as mentioned before; – 28% is under forest; – 35% comprises grassland/woodland ecosystems; – 22% is barren or sparsely vegetated; – 3 % each is used for human settlement or infrastructure and occupied by inland water. However, between 385 and 472 million ha, or almost one-third of cultivated land have been abandoned (Campbell et al., 2008) or lost to erosion and continues to be lost at a rate of more than 10 million ha/yr (Pimentel and others, 1995). Such process of land degradation will continue as long as current unsustainable land management practices persist. Which, in turn is more likely, if we re-call necessity to increase food production in line with population growth, by 70 percent globally and 100 percent in developing countries, i.e. by more than a billion tonnes of cereal grains and 200 million tonnes livestock products. It IS more likely, when developing countries intensify agricultural production, trying to double food output by 2050. It IS more likely, when use of pesticides, fertilizers, genetically modified organisms will be performing at constantly increasing rate, rather than applying principles of sustainable, organic, permaculture agriculture. 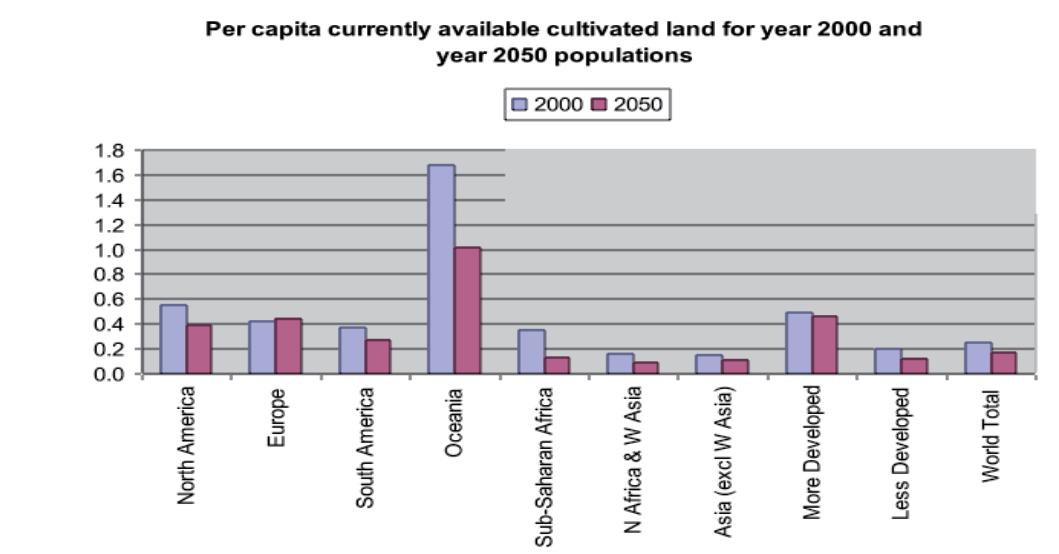 Such assumptions can be proven with the following: most developing countries are located in regions, which will be experiencing the largest population growth, have relatively poor quality cultivated land and are lacking possibilities for cultivated land expansion and are void of renewable water resources. These countries have no choice except to overcome resource scarcities with technological improvements. Which finally will turn into use of “improved and innovative” products of modern chemical industry. At least because most of organizations supporting such “technological improvements in agriculture” are supported by governments of one developed country, supported by… you know… And of course, because sustainable agriculture requires long term investments into technologies, education, seeds, infrastructure. Many countries simply can not afford such investments both in long and short term perspectives. I.e. in many developing countries, agricultural extension and marketing services have declined owing to budgetary constraints and low priority of political support for agriculture.Poor farmers simply cannot ¬Ý access the market because of the lack of infrastructure. Not to mention use of innovative and sustainable agricultural principles. Summary: it’s better to be in right region until, that is, land resources ended. Energy According to research of Russian Academy of Science, oil reserves in suitable for exploration areas will end in 300-500 years. ¬ÝAs you can see from the pic. below, consumption and reserves are distributer¬Ýirregularly across the globe. Thus, the U.S. or China may exhaust oil in 10 years, while Venesuela – in 200 years. 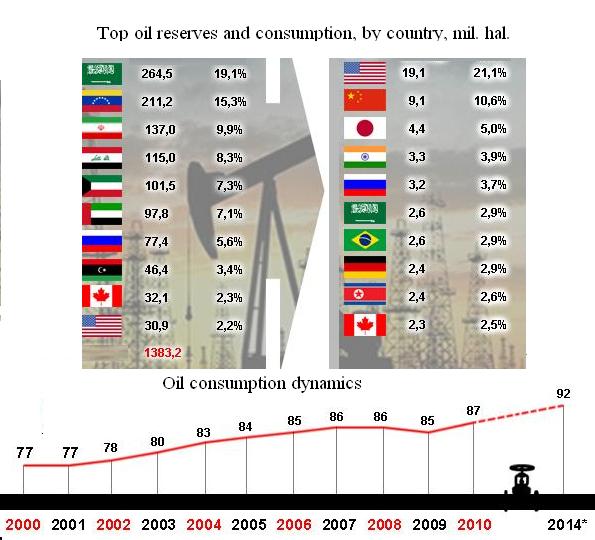 Such situation itself creates instability and it is even is dangerous if you take care about survival and prosperity of your “dynasty”. ¬ÝIt is simply imposible to survive consuming not renewable resources at such high rate as illustrated in chart above, and having no energy alternative. Not no mention possible political and social instabilities because of oil shortages. It is common sence nowadays to discuss about perspectives of renewable energy sources, from sunlight to biodiesel; according to forecast of Siemens, renewable energy sources will count up to 28% by 2030.¬Ý However, many of such projects fail, because of uncompetitive business models. ¬ÝSun batteries cost more, than electricity they produce during lifetime, unless installed in tropical countries. For example, Siemens made decision (Oct.11, 2012) to sell division, producing solar batteries, because this business is loss making; other solar batteries manufacturers, Solar Millennium AG and¬Ý Solon SE, bancrupted recently.¬Ý Wind mills may create health problems, if located nearby living places. Vegetable oils for biodiesel production are in deficit because of constantly increasing food demand and there are no alternative types of feedstock, capable to supply non-edible oils for biodiesel. E.g. jatropha or algae are not as good as promoted. And so on. It turned out that energy independence can be based only on natural resources. What’s a surprise ! ¬ÝEither your country has sufficient oil reserves or abudant land, water and sun. If you can name 5 or 6 countries more than Brazil …, tell me üôÇ Security I do not mean criminal situation in different parts of the world comparing to Brazil. Please look deeper into the question. There are rummors even about global nuclear apocalypto. For example: nuclear expert Arnie Gundersen and physician Helen Caldicott have both said that people should evacuate the Northern Hemisphere if one of the Fukushima fuel pools collapses. Gundersen said:Move south of the equator if that ever happened, I think that‚Äôs probably the lesson there. He told 7 mag earthQ is enaugh to do that, they just had 5,8((( Climate change Although ¬Ýconcept of global warming can not be regarded as 100% proven (at least if we look at 2000 years perspective, see chart below),

current climate change (see shortterm temperature chart below) and variability do affect thermal and hydrological regimes. In turn, this influences the structure and functionality of ecosystems and human livelihoods.

According to pessimistic scenario of GAEZ (2050 perspective), climate change will significantly impact irrigation water requirements and may result in reduced global production by 5 percent if crops can not adapt to this change. However, more optimistic scenario suggests global balance of crop production potential of the current cultivated land is not much affected because negative (even catastrophic for Africa) impact in one region will be compensated by positive changes in another. Summary of chapter and this “optimistic” scenario: it’s better to be in right region when climate changes. Why relocate to Brazil Actually I tried to answer the first part of question in this article’s title “Why leave your country”: why leave. For many¬Ý people (who can afford that) such decision is rather hypothetical ¬Ýthan questionable one. Which means: “bad times are possible, but they aren’t coming. Everything will be good.” ¬ÝYes, everything will be good, but still “winther is coming” (Song of ice and fire) and you must question yourself. ¬Ý“Relocate Brazil” is another story and I started telling it in this article (specifically) and in this category (generally). Yet, in a couple of words, Brazil is a good destination, because: – available land, favorable climate and abudant water reserves will never make agriculture¬Ýunprofitable; not to mentioned guaranteed bread for your and hundreds of your ancessors’ generations; – ¬Ýenergy independence: from huge hydropower stations to ethanol distillers; – political and social stability.