The end of millennium looked like a triumph of¬Ý ‚Äúfree world‚Äù over totalitarianism ¬Ýand dictatorship, like a victory of globalized, open path capitalism over communist planned economies. ¬ÝThe point, that results of this victory are enjoyed mainly by eastern European oligarchs and some CIA officials, is not interesting to anyone in this world. Some people like living in own magic world without 11th of September (which would never happen if USSR exist), some people just are proud to be ‚Äú-insert here your description-‚Äú.

Yet nowadays we need to state that conflict between ‚Äúgood and better‚Äù is not finished. It continues in all known directions: currency rates, prices and costs, rates and tariffs. 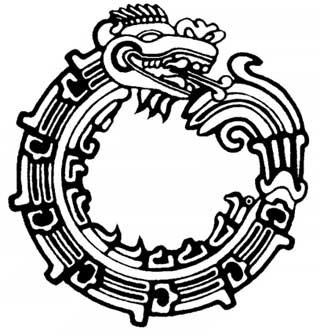 If someone asks about meaning of a picture where dragon bites its tail, he can find numerous explanations. Do not mind. This is currency war between China and the United States.China is the biggest creditor of the United States, and in the same time it‚Äôs the biggest supplier of the United States. Chinese want¬Ý to get a reasonable return on the trillions of dollars of American paper they are holding, ¬Ýbut the only they can get is another portion of paper, which ¬Ý the United States have ¬Ýto print, print, and print to pay for goods ‚Äúproudly made in China‚Äù. (If you buy US goods, you understand what I mean).

If ¬Ý we extrapolate the above mentioned countries to two models of capitalism, we would say: such conflict would never end, or no one is capable to predict its consequences. ¬ÝYet, world has been changing and more players come into stadium. Some of them are just recovered and begin race, likeRussia, some others are young and aggressively build capitalism, such as Brazil.¬Ý ¬ÝThey hike tariffs on dozens of ¬Ýproducts, limit or prohibit imports. We can mention as an example new veterinary requirements for US meat in Russia or limit of imported vehicles in Brazil.

‚ÄúThese are unhelpful and concerning developments which are contrary to our mutual attempts‚Äù to strengthen the world economy, Ron Kirk (U.S. Trade Representative)¬Ý stated in a strongly worded letter to Brazilian officials that criticized recent tariff hikes as ‚Äúclearly protectionist‚Äù, which¬Ý are far away from the globalized, open path capitalism, advocated by U.S. across the globe.

In other words, global economies like U.S.feel discomfort when some countries like Brazil start to protect own markets. ¬ÝThus evolving into state-guided capitalism that the United States has been battling to change in China for years. I would bet cent against dollar, protectionism such developing countries as Brazil will be strengthened, which in turn will question globalization in general; i.e. most countries will try to improve own competetiveness and close markets for competing goods and services, building state model of capitalism. Simply because there are things which most countries can not compete with: effective labor force (based on cultural traditions and wise state politics) and¬Ý ¬Ý cheap money from the U.S. Federal Reserve. This is even more remarkable if we recall these countries are among these which constitute world economics: Russia, Brazil, Argentina.